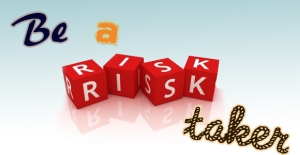 by taking bold decision. Examples from the pass will help reflect on where motivation comes from.  Why people avoid as much as possible risk? Because taking some risk imply some exposures. Nobody likes to show their vulnerability. Risk occurs when we put our reputation, beliefs, financial security, personal well-being, or even our lives on the line. Some do so simply for the thrill, or in the hopes of achieving some higher goal.

What motivate two men from the pass to take some great risk? Ezekiel was a prophet that lived about 600 years before Jesus; John was an apostle who lived during Jesus lives. Both of these men saw with greater clarity what was coming, they saw what others could not see.

Without risk takers, life would be even more dangerous. Politicians, doctors, and scientists throughout history who were willing to take well-calculated risks have benefited us all. A medical example will help us to understand how civilization did benefit from a courageous man who risk.

“Smallpox was the menace of mankind in 1717 when Zabdiel Boylston developed an effective but hazardous method of protection. He called it innoculation. He injected a small amount of infected material directly from smallpox patients into uninfected patients.”[1]

Avoiding danger is no safer in the long run than outright exposure. Life is either a daring adventure or nothing.–Helen Keller

Because these men saw with greater clarity what was coming, because they saw what others could not see, they took risk because they knew that doing nothing would bring destruction of many lives.

Security is the mother of danger and the grandmother of destruction.–Thomas Fuller

Even though the Bible never uses the word risk, story after story tells of risks taken, risks that end in flaming disasters or inspiring victories.  Did the shepherd left the ninety and nine in the safety of the fold and went out to search for the one lost sheep? No, the ninety-nine were left not in the safety of the fold but in the wilderness. “Only God, exhibiting his risky, careless love, would leave the ninety-nine in the wilderness to look for the one who is lost.”

The risks taken with the goal of presenting the gospel to those who have not heard are high-priority risks indeed. Ezekiel, John, Zabdiel are all men who saw what others could not see. They knew that risk was inescapable; they cross the security line and sailed off shore into deep water. They expose themselves for the well-being of others; putting their reputation, financial security, personal well-being, or even our lives on the line. For a Christian there is a risk when confronting a fallen world with the gospel’s radical message. The question a Christian has to answer, are we willing to use our gifts and risk for the kingdom’s greatest advantage? A similar question need to be answer by anyone who see what others cannot see, are you willing to take a risk that will benefit others?